First things first…I first registered 99shadows.com back in 2000/2001 and, through my own stupidity (and having way too many email addresses to keep track), it

expired in 2016 because I missed a payment and by the time I realized it, it was too late to get it back. Imagine my horror when it “reappeared” online as an…eyeshadow blog.

I have spent every June since then hoping and praying that the owner would not renew the domain, and sure enough, that’s exactly what happened last month, and I was able to retrieve it through a backorder and an auction (you know, at one point, I even offered the owner a couple hundred bucks for it…I got it back for $29). Woo!

Anyway, I’ve decided to go in a different direction with the site now. Lately, I’ve been (obsessively) listening to paranormal and true crime podcasts, so what better topics for a site called 99Shadows than the weird, morbid, and creepy, right?

So…please bear with me as I resurrect my site and enjoy this true crime story that I wrote in anticipation of being back in the shadows!

I grew up in the small town of East Bridgewater, Massachusetts. About 25 miles south of Boston, it’s considered a Boston suburb, but it’s very rural to those of us who live there. The neighborhood where I grew up consisted of a lot of 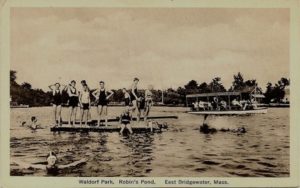 smaller homes, most without basements, that had started their lives (as my childhood home had) as summer cottages, several of them occupied only by their Boston area owners during the warmer months.

Across the street from our house (north) was a two-story Cape house and to its east was a one-story ranch. Between those two houses and sort of diagonally across the street from our house was an empty lot. This empty lot went back to a large wooded area that was behind all of the houses on the opposite side of the street from us, all part of a large piece of property belonging to a woman whom we knew as Evelyn Waldorf. Evelyn seemed ancient when I was a kid, and my mother said she was old when she was a kid as well (my mom grew up in the house I grew up in).

The property was known as Robbin’s Pond Park Campground, but we all just called it “The Park.” The actual campground, and Evelyn’s house, were on the other side of the woods and accessible by Pond Street, which wasn’t very close to us at all. Hillcrest Road turned into a dirt road across from our house and if you went all the way to the “end,” it became a sort of trail that led into the woods, and that’s the way most of us kids went into The Park (and got chased out by Evelyn a lot of the time).

Evelyn would occasionally drive down our road and stop her car at the empty lot across the street. This was her way of maintaining “ownership” of it because it really was part of her property, though we had neighbors who seemed think if they mowed the grass there, they’d eventually own it by right somehow. 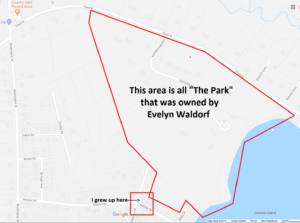 Anyway, it was mostly a sloping field with some big raspberry bushes in the middle of it, and we kids used to use it for neighborhood games like Red Light/Green Light, Red Rover, and for sledding in the winter.

My mom told me a story once that she’d heard when she was a kid about Evelyn’s mother being murdered, but she didn’t know all the details, just that she’d been decapitated. She also said that Evelyn’s family had changed their last name afterwards to dissociate themselves from the case.

As someone with an inborn fascination with all things weird, I of course needed to know more about Evelyn’s mother, but it wasn’t until the advent of the internet that I finally got my answers. As it turns out, Evelyn’s surname at birth was actually Wolschendorf. Her mother was Alice Mildred (Orcutt) Wolschendorf. I’m not even sure how I first found the story about Alice’s death, other than perhaps a simple search for “murder” and “East Bridgewater” and perhaps tossing in “Evelyn”…but eventually I found the story of “The Suitcase Murder.”

On September 1, 1923, the headless, dismembered torso of a woman was found floating in a suitcase in the Merrimack River near Tyngsboro, Massachusetts. Two days later, the limbs belonging to that body were discovered in a second suitcase in the river two miles away. Detectives in cities across the state began trying to figure out who the woman was and eventually learned, through a scar on a finger of her right hand identified by her husband George Wolschendorf, that she was his wife Alice, age 43, who had been missing. William Bowen, by whom Alice had been employed as a chauffeur, also identified the body by way of the scar.

From information supplied by the husband and Alice’s employer, police began investigating two men – Dr. Dalva H. Swope of Brockton, Massachusetts, and Dr. William H. Robb of Boston, and on September 14, both men were arrested. Dr. Robb was charged with illegal surgery, resulting in death, and Dr. Swope was charged as an accessory (he sent her to Dr. Robb’s office), though he (Swope) was never brought to trial and died in January 1926.

As additional confirmation of the story my mother told me is a news article from the Trenton Evening Times (a New Jersey paper) on September 29, 1923, which stated that George Wolschendorf told a reporter that he “has taken steps to have his name changed from Wolschendorf to Waldorf. ‘I hope in this way I may free myself and my children from association with the suitcase murder some time in the future. The name Wolschendorf has been dragged through the mire.’ “

Interestingly, William Bowen attempted suicide by poison and slashing his own throat with a razor on September 16, 1923, apparently despondent over the case (he survived initially, but from the news article below, it appears he died at some point afterwards). Mrs. Wolschendorf was last seen when her son Harold and Mr. Bowen drove her to the vicinity of Dr. Robb’s office in Boston on August 27, 1923.

Other news reports covering the case indicate that Dr. Robb told authorities where they could find the missing parts of the body and directed them to a camp in the woods of New Hampshire where the body had been dismembered and where the head and other missing parts were found. Another article said that Alice was the mother of four children with her husband, but that she and George were separated. Her employer, William Bowen, was a real estate developer and the father of seven children.

On December 8, 1923, the following article appeared in The Morning Call (Allentown, Pennsylvania):

Cambridge, Mass., Dec. 7. (AP)—The solution of the “suitcase mystery,” one of the most sensational cases to come before the police of Massachusetts in years, was written today when Dr. William H. Robb, held under an indictment of first degree murder, in connection with the death of Mrs. Alice M. Wolschendorf, of East Bridgewater, pleaded guilty to a charge of illegal surgery in Middlesex Superior Court. Dr. Dalva H. Swope, of Brockton, indicted as accessory before and after the alleged murder, was re-indicted today as an accessory before and after the illegal operation. District Attorney Arthur K. 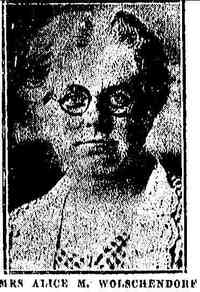 Reading moved for sentence next Tuesday. The murder indictments have not yet been nol prossed.

On the first of September of this year, the headless and dismembered body of a woman was found floating in the Merrimack river near Tyngsboro, Mass. Two days later, the limbs of the body were found in a second suitcase in the river two miles away. State detectives and the police of a dozen cities joined in the unravelling of the mystery. Through a scar on a finger of the right hand, the body was identified by George Wolschendorf as his wife, who was missing. William Bowen, who had employed Mrs. Wolschendorf as a chauffeur, also identified the body by means of the scar.

Through information furnished by the two men, the authorities investigated the movements of Dr. Swope, of Brockton, and Dr. Robb, of Boston. On September 15, Dr. Robb and Dr. Swope were arrested. They protested their innocence.

According to investigators Mrs. Wolschendorf died under ether in the physician’s office and then, to avoid identification, the body was dismembered.

Anyone reading this, especially in the 21st century can pretty much guess what happened. Alice became pregnant and didn’t want to be pregnant. Dr. Swope directed her to Dr. Robb for an “illegal operation,” and unfortunately, she died during the procedure. We can speculate about who the father of the pregnancy was, but since it was never disclosed, we should probably just leave it to the past.

Evelyn Waldorf (nee Wolschendorf) was born Oct. 6, 1910, so when my mother was growing up in the 1950s, she very well could have seemed “old” to her, and she certainly was old to me growing up in the 70s. She died on August 4 2005 at age 96. She bequeathed her property to the Full Gospel Tabernacle of Brockton, Mass., but the last I saw it had been sold to a developer and there were issues with the Native American historical significance of the area hindering the development of the land.

UPDATE 7/28/2019: I did a bit more research on this case via Newpapers.com and found confirmation that Mrs. Wolschendorf died as a result of an abortion procedure. On Dec. 7, 1923, Dr. William Robb pleaded guilty to a new charge of abortion. On Dec. 12, he was sentenced to either 5-7 years or 7-10 years (accounts vary) and directed officials to the location of the parts of her body that were still missing (her head and her pelvis). 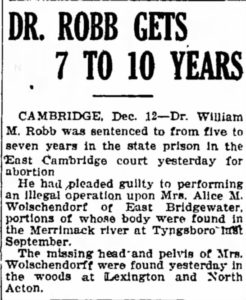 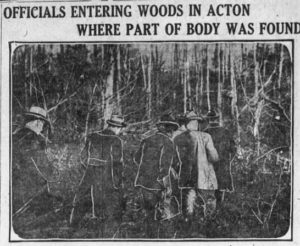 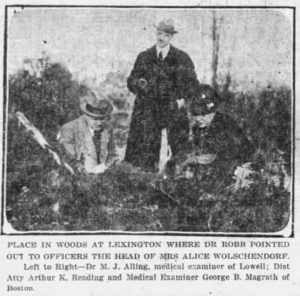 A sad end to a tragic story, but at least there is now closure. It’s also a very timely story considering all the folks in 2019 who are trying to make abortion illegal again.

2 Responses to The Suitcase Mystery